Is AADOM Worth It? [A Real Dental Manager’s Experience] 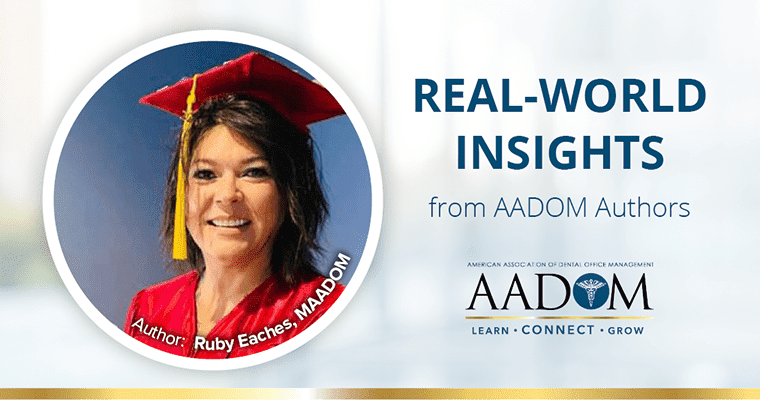 My fear was to finish school, then hand over a license and dental practice for someone else to run it for me.

By the time I settled down in Newport, Rhode Island (2004), my son was in middle school. I thought there was no better time than then to get to work on my education. I enrolled full-time to finish my bachelor’s degree while accepting a full-time position as a dental office administrative assistant.

When I interviewed with the dentist’s wife, I told her about my goal, and she was more than willing to show me the ways.

After two weeks, she decided that I was trained and hardly showed up after that. She sometimes returned my calls… but mostly, I was figuring “it” out on the spot.
We had one dentist, two hygienists, and two dental assistants. It was a day in and day out learning experience. I managed to work this way for seven years.

Moving to a new dental practice

In 2011, my son graduated high school and enlisted in the Army. I was at a crossroads. I had done everything I needed to get accepted into dental school, but I didn’t want to go to dental school anymore. I had fallen in love with managing a dental practice.

Nothing was keeping me in Rhode Island after my son left for the Army, and by then, I had enough of the New England winters, so I moved back to the beaches of Surf City, North Carolina.

I had sent out my resume prior to moving and landed an interview about a month after arriving in paradise. I was hired on the spot as a manager for Surf City Dental.

One dentist, two hygienists, two dental assistants… sound familiar? I got this… but I was itching for more.

Wanting more out of my dental career

I hadn’t been in school for a few years, and I felt like I was ready for a challenge; I just didn’t know what that challenge would be.

In September of 2013, just a short two years later, the dentist sold the practice, and I was now employed by a new owner and newly-practicing dentist.

Not only did I need to help transition my team to a new owner, but this owner was also eager to grow. With all the changes and showing a new dentist the ins and outs of being a business owner, I needed some backup.

How I found AADOM

I did what everyone does when they are looking for answers… I used Google!

It was then that the AADOM website caught my attention. I flipped through the website and felt like I had found friends. It took me all of 10 minutes to join the AADOM organization.

I visited the members’ forum, poked around to see what everyone was talking about, and noticed a lot of chatter about the Annual Conference.

I had just hired a new admin assistant with no dental experience, so I was training her on the job and thought what better way to get her acquainted with the dental world than to register us both for the 2015 Nashville Conference.

What a beautiful venue. There were probably 800 attendees, and the energy alone was enough to “fill my cup.”

During our lunch on Friday, they had a graduation ceremony for the office managers that complete further education requirements to become a Fellow. It was such an emotional accomplishment for these really impressive dental office managers. I just had to know more about it.

I spent three powerful days of learning from other managers and listening to speakers that know everything about everything while re-energizing myself!

We went back to our office, excited to share what we had learned.

We implemented new procedures that made it easier to do our jobs. I shared jewels of wisdom that motivated my team. I was organized… or at least I was getting there.

I spent the next year learning. I studied. I watched webinars… and I studied some more.

Finally, I fulfilled my requirements and walked across the stage in Boca in 2016 and was awarded my very own Fellowship!

I went alone to the conference that year but, I met the sweetest office manager and her dentist from Washington. We’ve continued our friendship over the last four years. She also became a FAADOM!

Additionally, I met the incredible Triangle Chapter… This text opens a new tab to the chapter’s website… sisters, and they welcomed me with open arms. We were honored to watch Claudia Paye receive the Green Leader of the Year Award! She was so inspiring with her speech and familiar message.

Back home, we had just purchased a property and were planning on building a new standalone 5200 sq. ft practice. We had been consciously making “green” decisions for the new office, so I was eager to hear what she had to say.

In the summer of 2017, we opened up Surf City Dental on Aloha Way without a hitch. The guidance and support I received from the AADOM tribe members made me feel supported.

I hired a new associate, an additional full-time hygienist, and another part-time RDH for Saturdays. Then in just a few short months, I hired an additional assistant, a hygiene assistant, and a patient concierge; this team is now 13 members strong.

I gained confidence with each decision made.

My doctor recognized my efforts with our sustainable green choices, nominated me, and I was awarded the National Green Leader Award in Scottsdale, AZ. I was beyond honored to receive the award for my practice and my team!

In 2018, I became a lifetime member. This choice was an easy one.

AADOM is made up of the ones who “get” me. The encouragers! My sounding boards.

The annual conference was in San Antonio, and I took our clinical coordinator. We bonded over tacos and education, all while growing to count on each other even more!

We participated in the “I am” challenge, and it was clear that we had found our TRIBE. There is no better reward than to mentor and watch your team members evolve into team leaders.

In 2019, our Wilmington AADOM chapter… This text opens a new tab to the chapter’s website… was awarded 3rd place Chapter of the Year! I have been a member since the chapter started in 2016, a board member, and now the vice president.

Now, here in 2020, I’m so excited and honored to be inducted with the very first group of AADOM Masters!

Is AADOM worth it?

With the awards and recognition aside, it’s the friendships, the camaraderie, and the education that keep me coming back for more… and the hugs! To say that I have been blessed since I joined AADOM would be an understatement.

I just don’t know how I did it before AADOM! 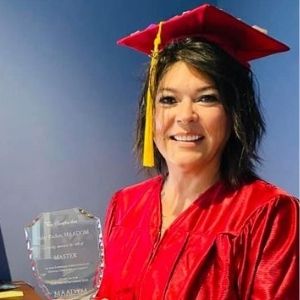 Ruby began her dental career in 1990 in the United States Navy.

In 2004, she became a dental office manager for the first time, when the wife of the dentist put her there to “figure it out” on her own.

In 2014, she “sipped the Kool-Aid” by attending her first AADOM meeting.

By 2015 she had her AADOM Fellowship and was awarded an AADOM Green Leader in 2017.

Ruby’s been nominated two times for Practice Manager of the Year.